From the Jeep Blind

The orioles arrived earlier this week at the farm so I made 4 feeding stations for them with orange halves.
One is on an old post that in the past supported a bird house. The raccoons toyed with the house pulling part of it down and left it hanging upside down.  I too left it hanging upside down…until finding a perfect use for it as an orange holder.  I also pounded nails into the post as additional orange hangers.
One is on an existing wrought iron type trellis that holds hanging feeders. I used a padlock to hold one of the tube feeders to the trellis, as the raccoons would raid the feeder at night. The padlock did well to hold the top of the tube feeder on the trellis but the raccoons succeeded in pulling the tube itself down – leaving only the top securely attached to the trellis via padlock. So I turned it upside down, secured it with several long zip ties and skewered the orange halves.
The other orange station is in the middle of a double shepard’s hook holding feeding platforms. I attached an old large grill fork to the middle of it – tines up – and skewered fruit. On this one, I put a half mango on the bottom and an orange half on top – wanting to experiment with different fruits.  From what I have observed, the male orioles want nothing to do with the mango – but the female orioles have cleaned the mango out nicely.  I think I will next try a pomegranate.
The last station is merely one nail in a tree trunk – at DBH height – with half an orange.
The feeding stations are quite active and daily the oranges are totally pecked clean.  Naturally I wanted to observe them at a closer distance – but no longer have any field blinds as they were all stolen about a year ago. So I decided to use my Jeep as a blind.  My thought was that a bright yellow Jeep looked probably less threatening than me trying to sneak up on them.
So I positioned the Jeep near the stations and opened the windows for clear view. Also decided to sit in the back seat so I would be less obvious. So climbing in my back seat – having to push over my large plastic tote holding field gear and bubbles – being careful of my toes (only wearing toe socks) around the hand saw and clippers on the floor – cramming myself into a sliver of the back seat I pull the door shut – and realize I am too cramped to maneuver the camera so I try to open the door…and remember it is the door that doesn’t open from the inside.  Now I am squished and stuck in the back seat and try to crawl about for some space.  So from my Jeep blind I had an interesting couple of hours before crawling over the seat to open a working door. 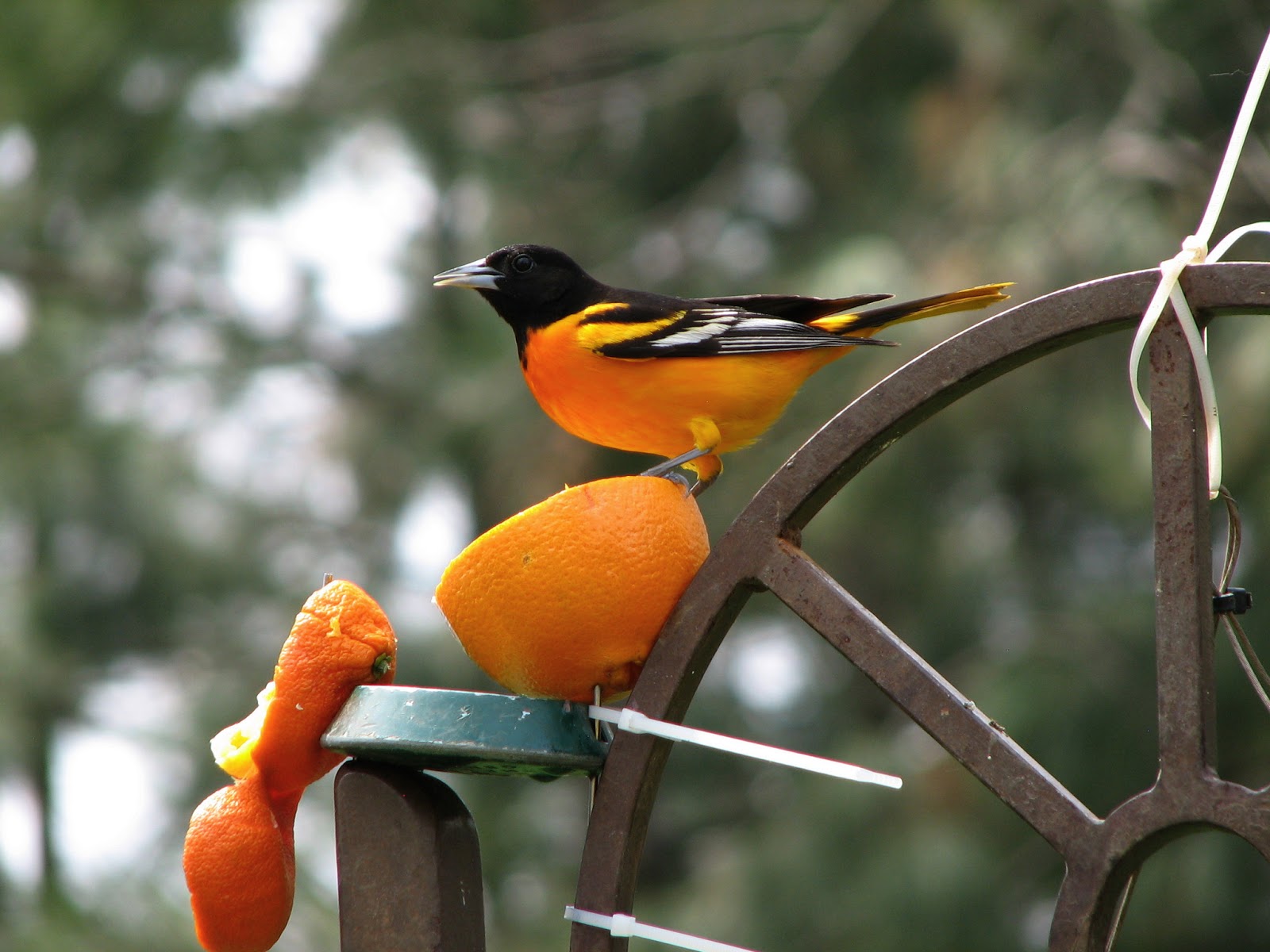 in come the Baltimore orioles to the orange trellis – note the inverted lid of a tube feeder holding the orange and, of course, can’t miss the zip ties 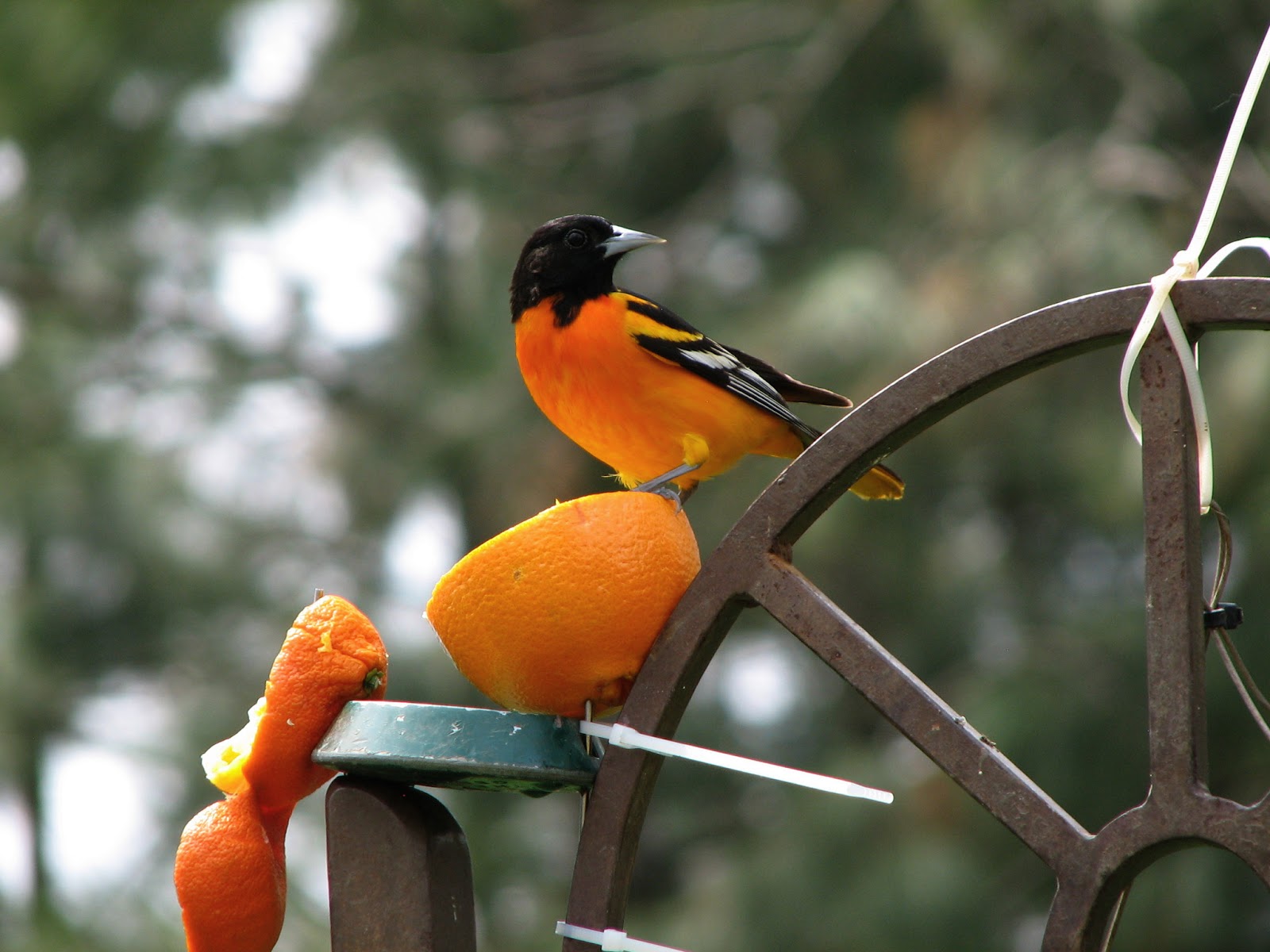 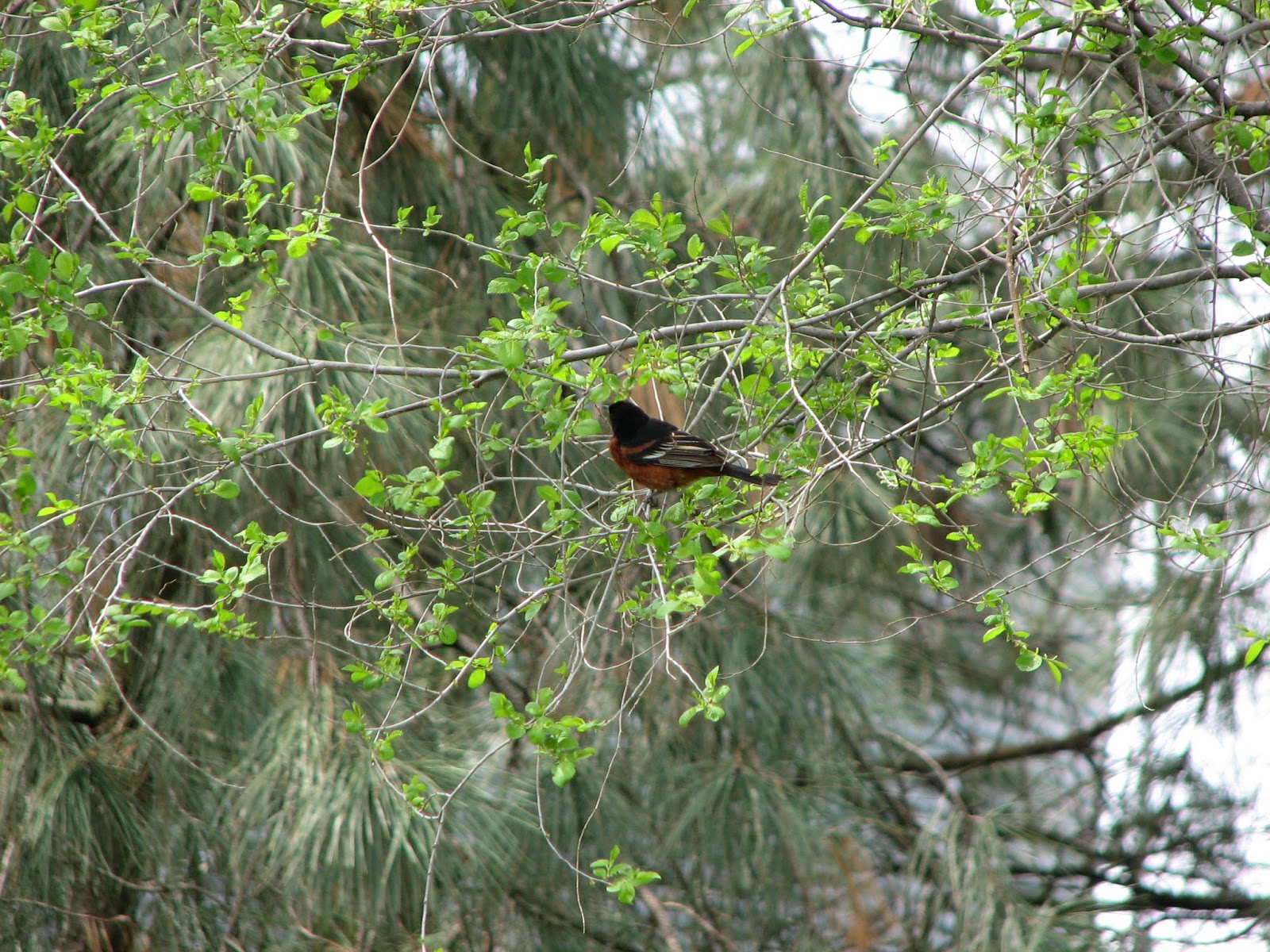 then in comes an orchard oriole – sending the Baltimore flying 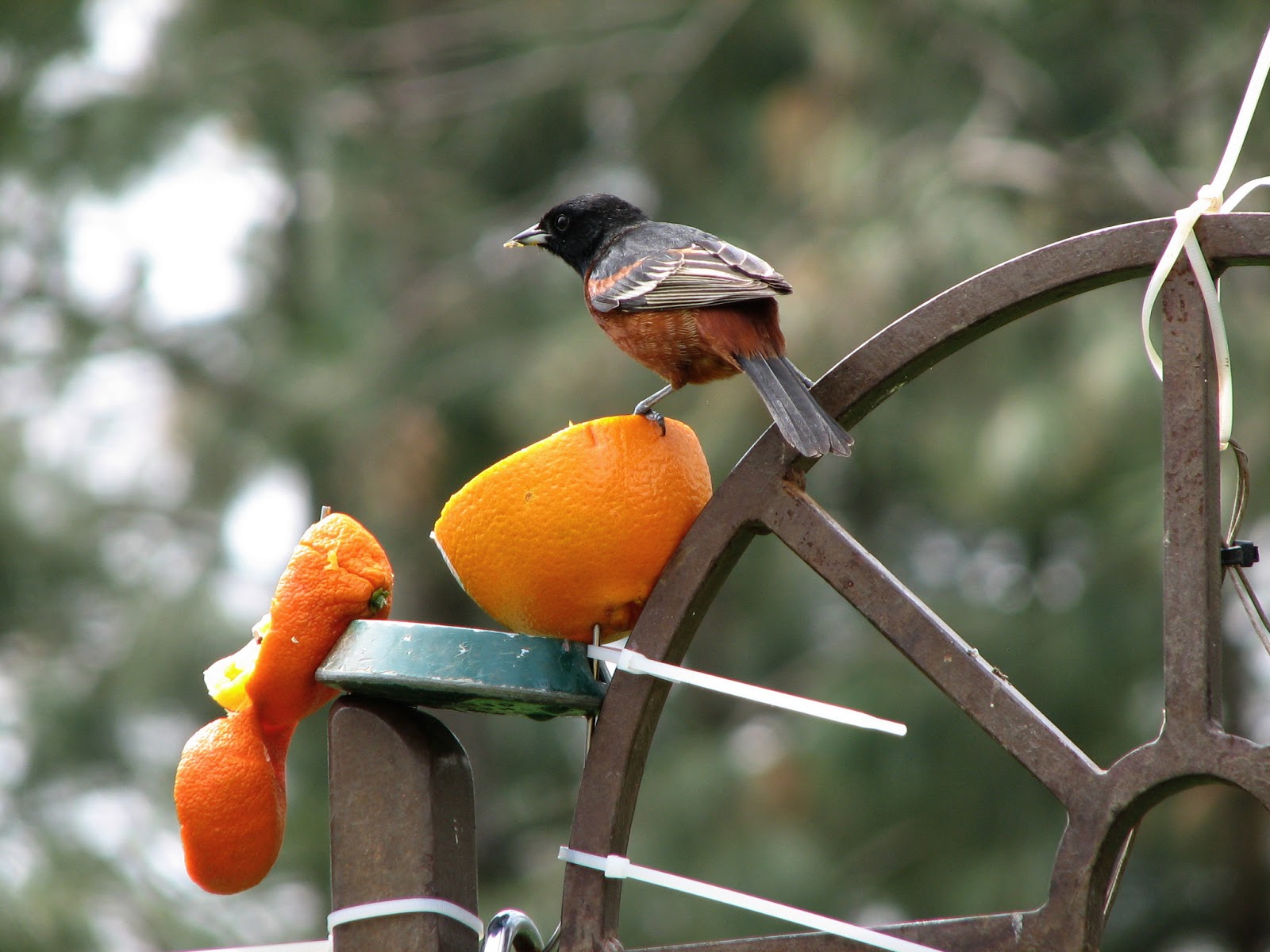 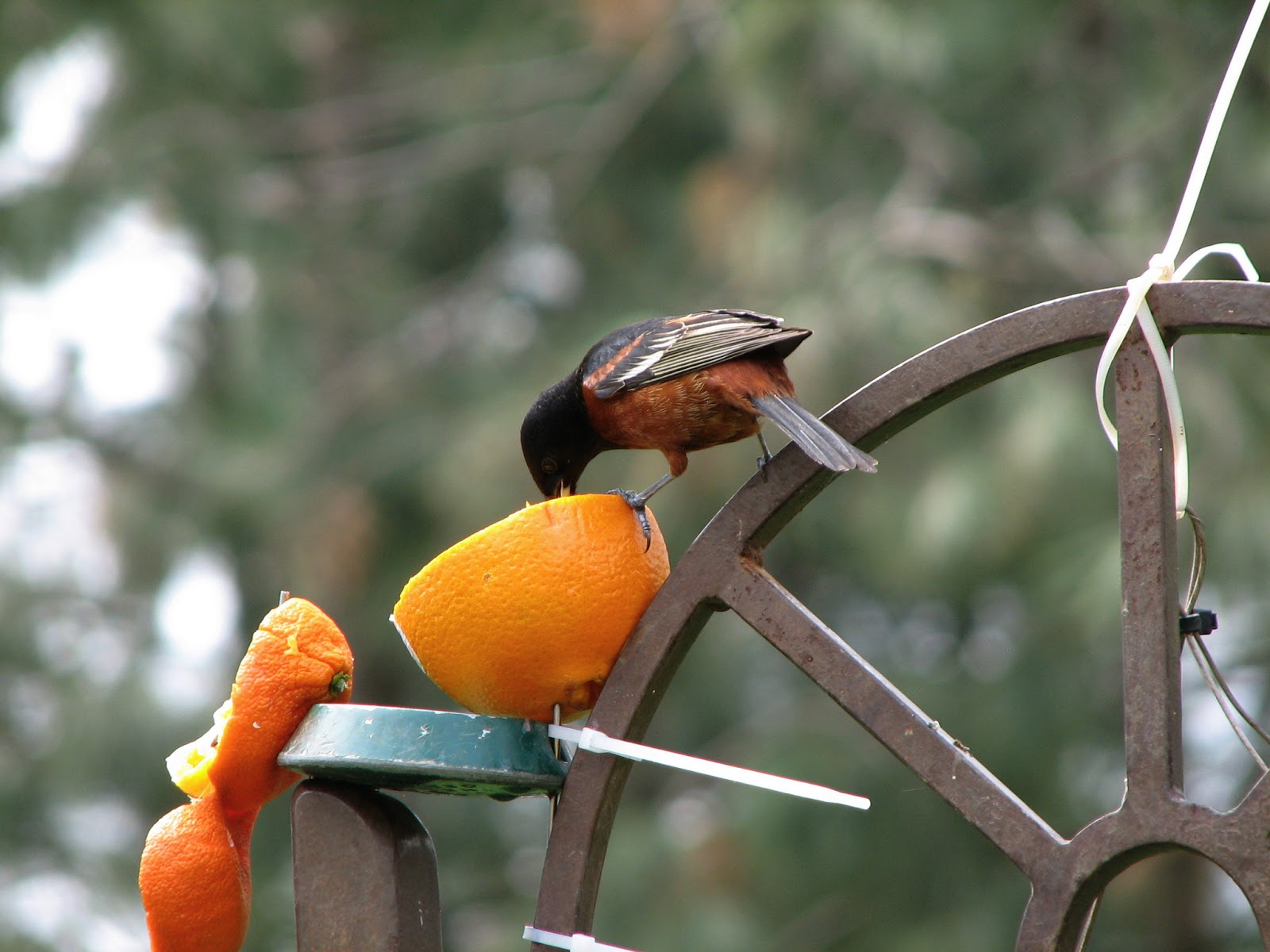 but the Baltimore stays gone not so long 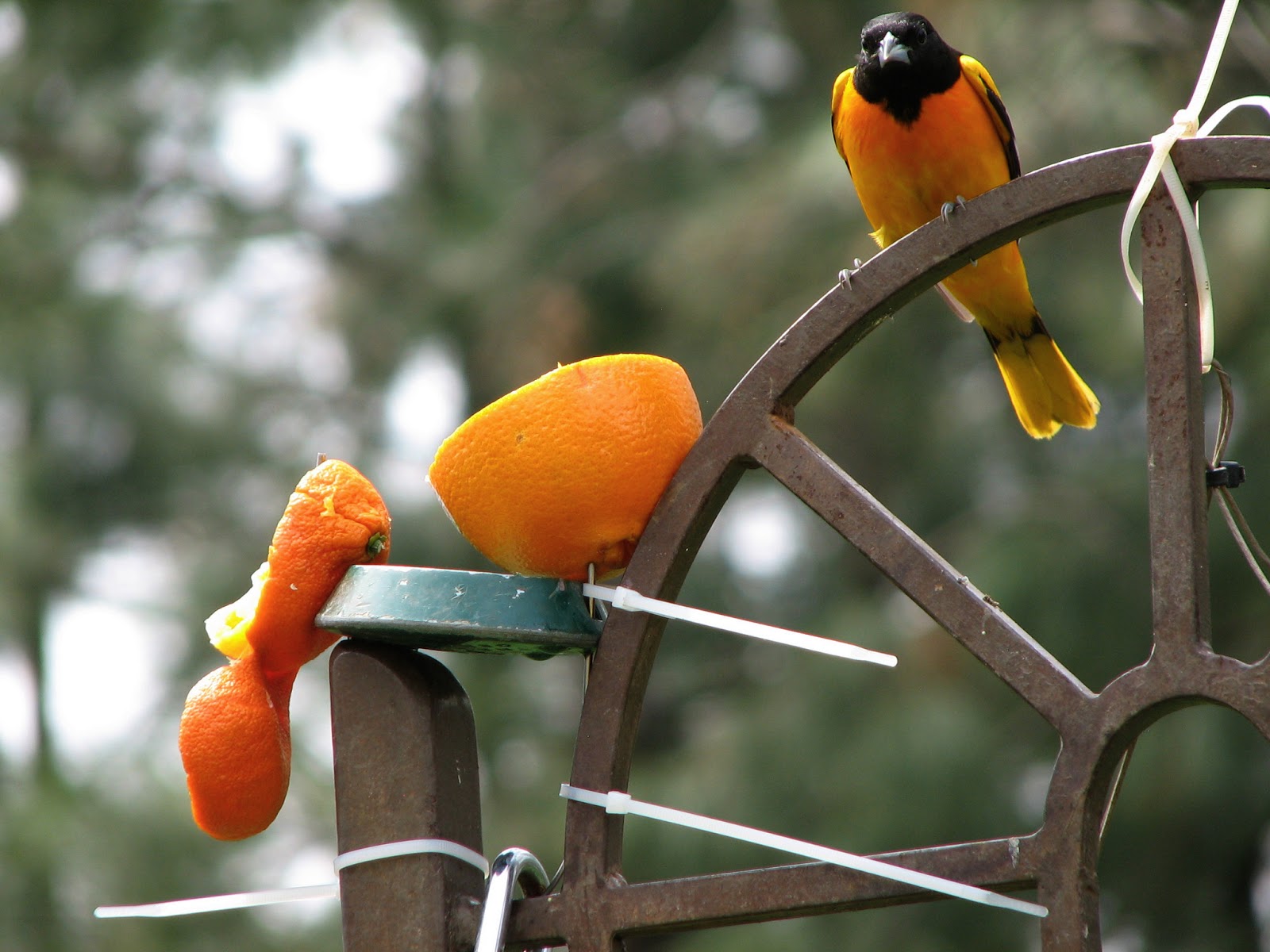 And returns to take over the orange
Then the grosbeaks begin their acts at the platform trellis feeder. 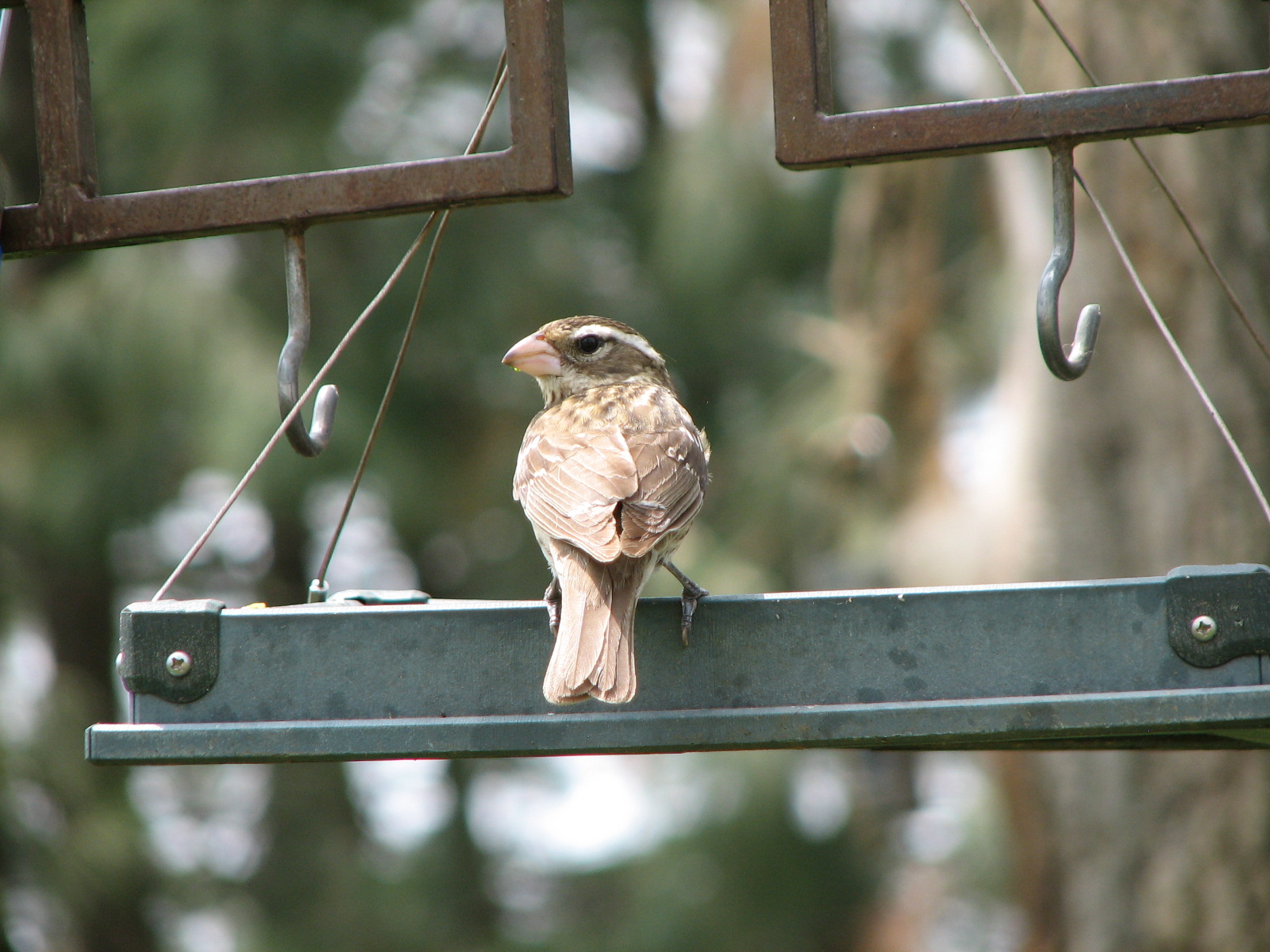 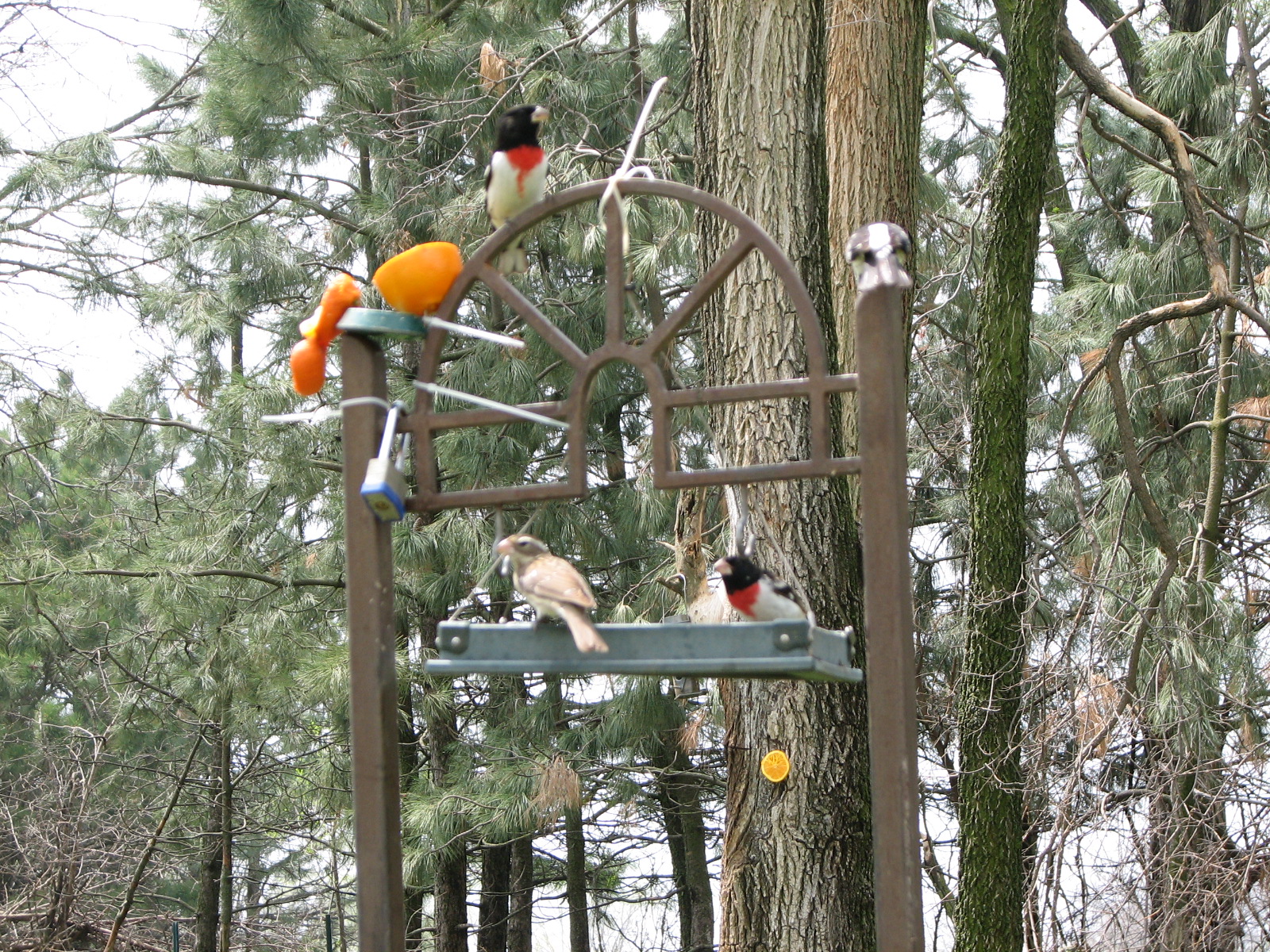 Then another female arrives to gain attention 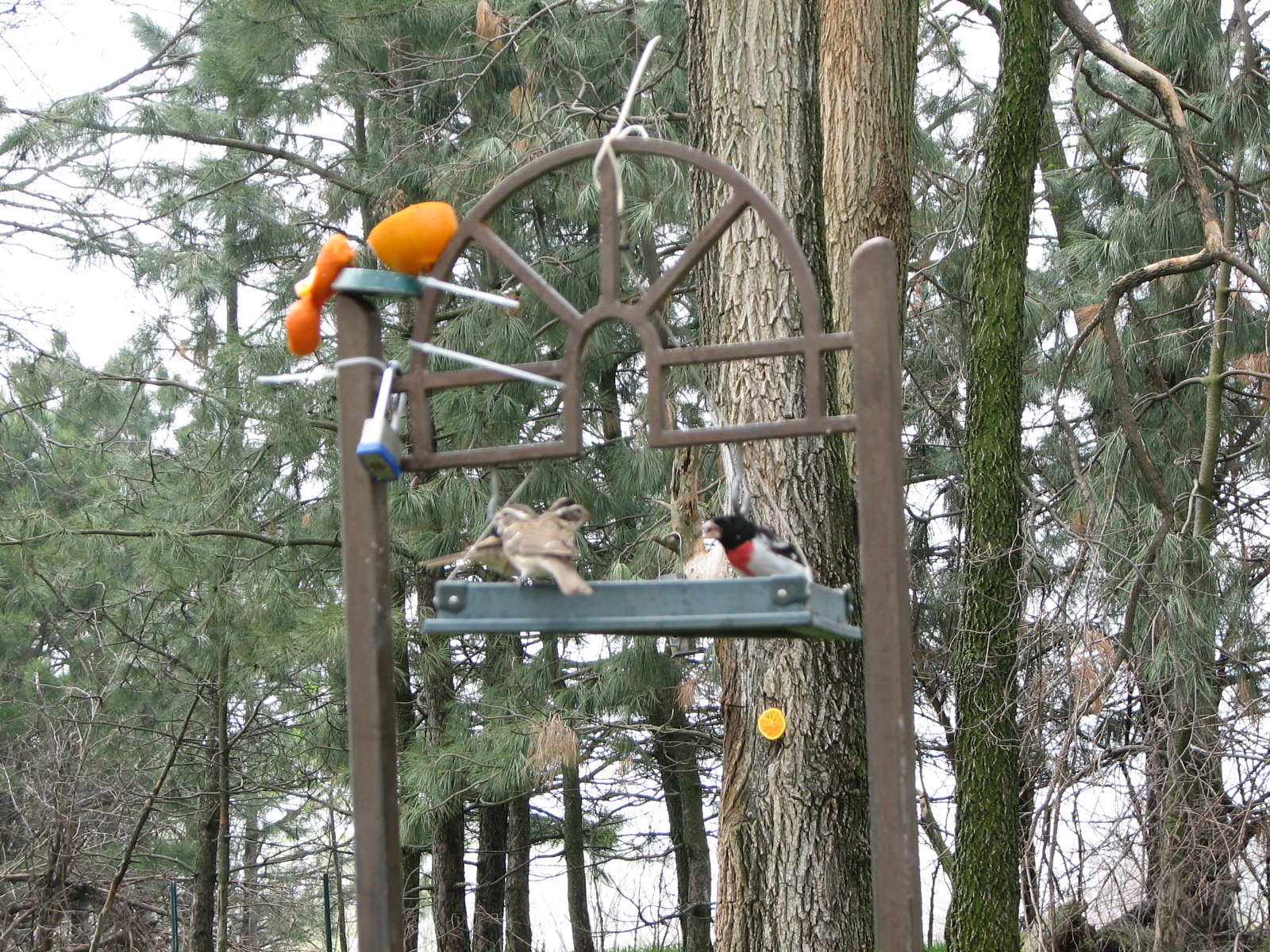 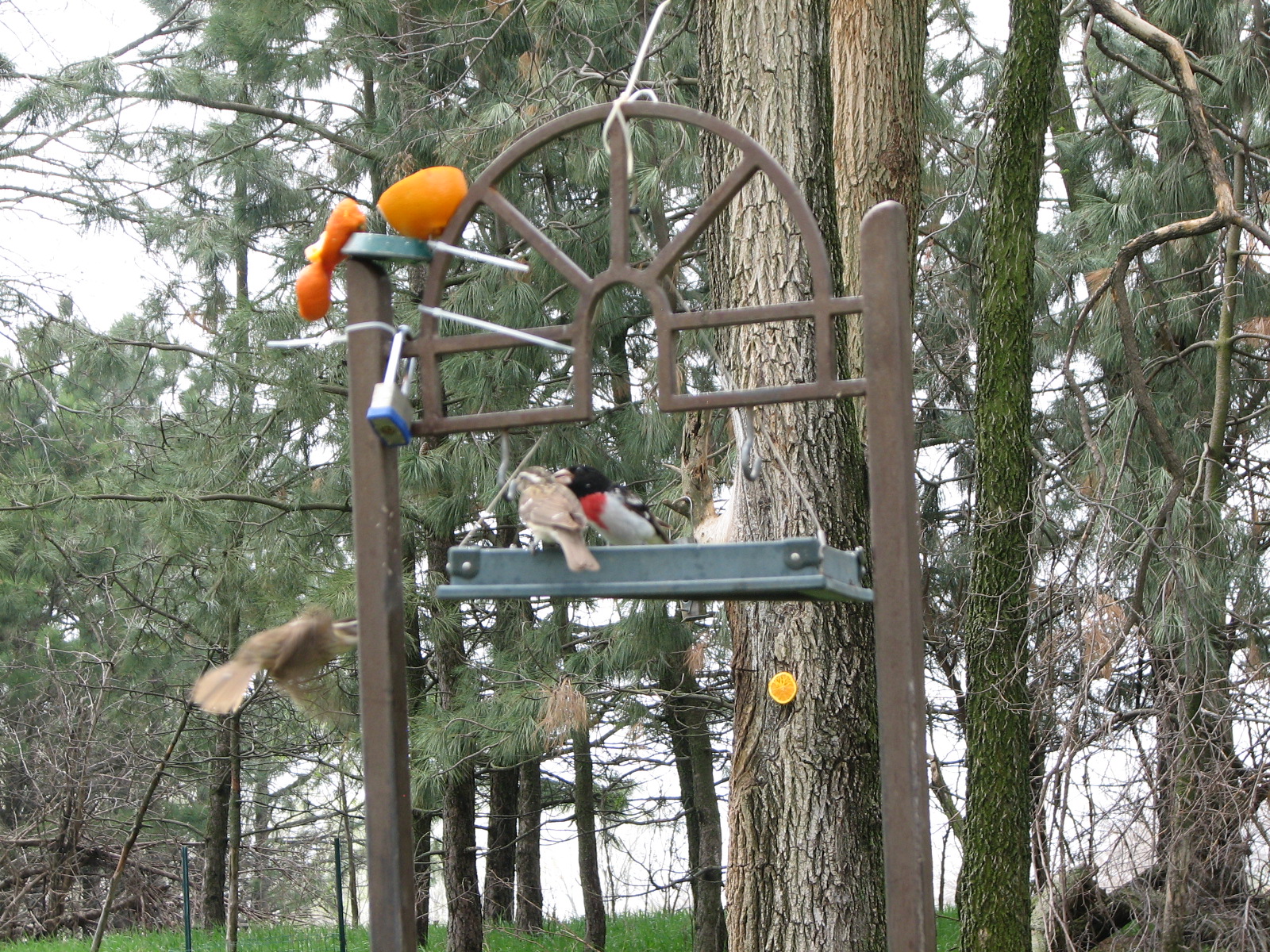 But wait – one of the interlopers is back! 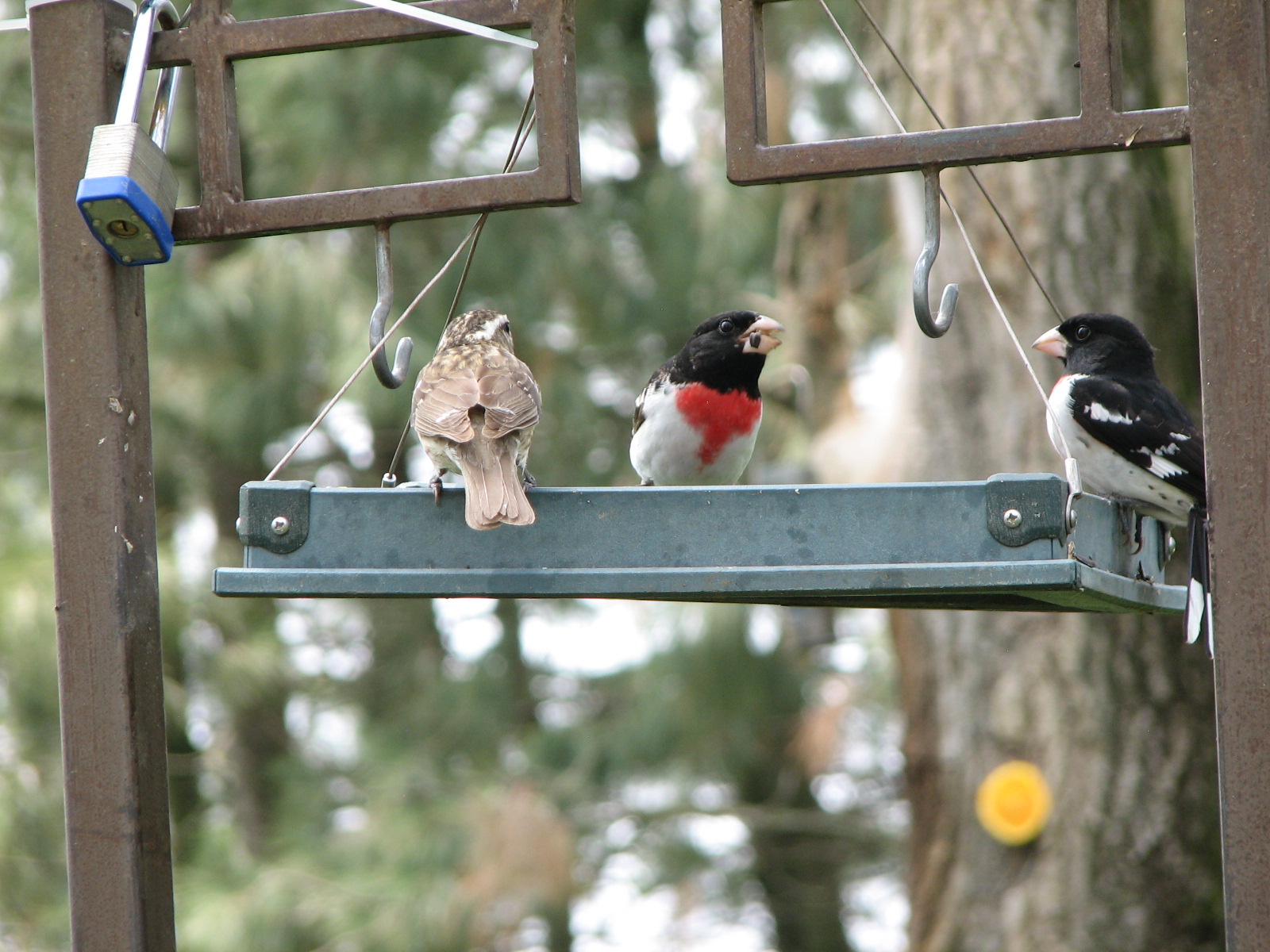 BE DONE WITH YOU – AND NEVER RETURN!!! 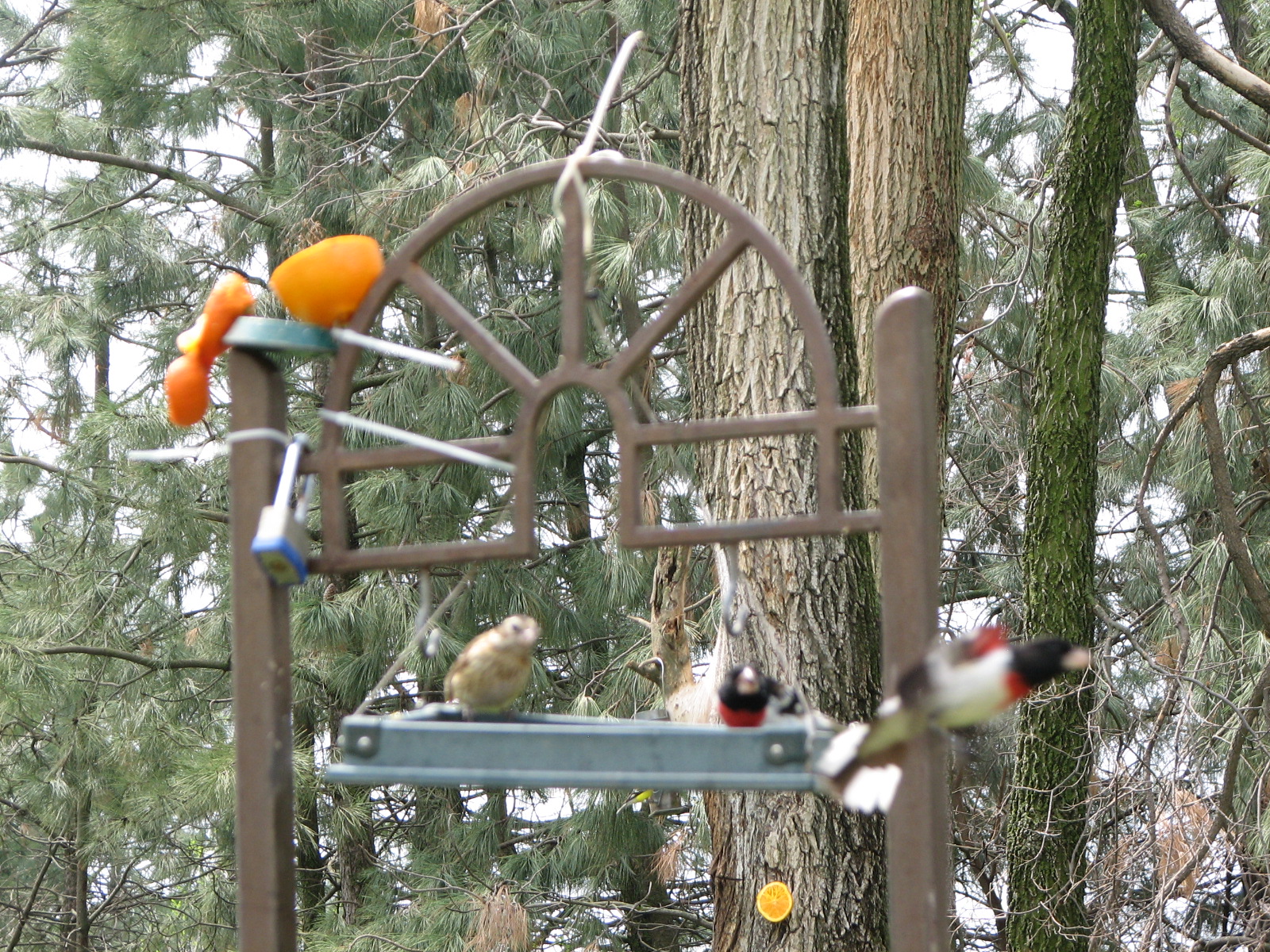 He now turns to his beloved assuring his love 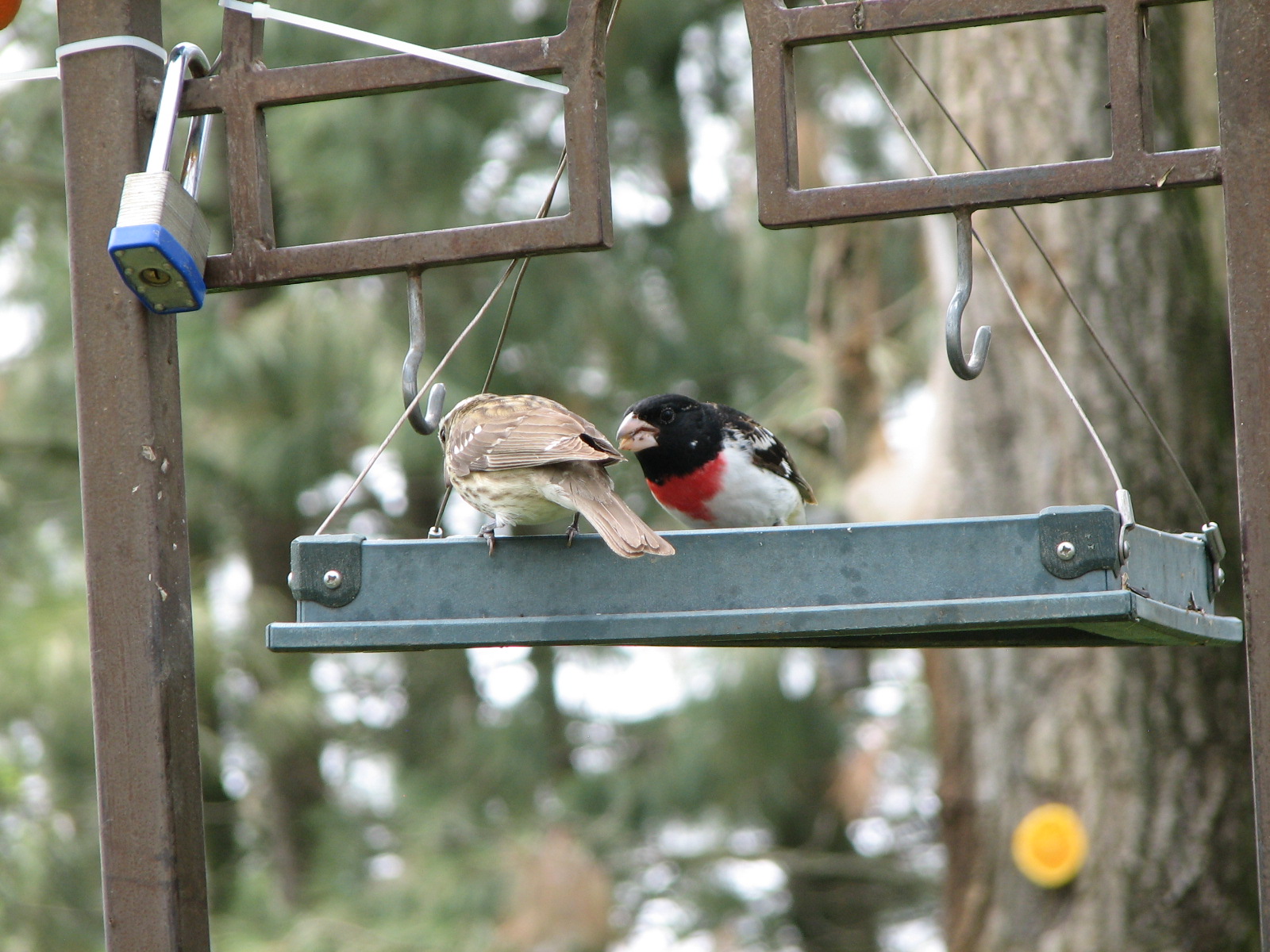 It was at this time that I realized while trying to jockey myself around in a cramped space – I kept hitting the camera settings – and thus reduced some clarity to blurry – the camera manual states I was in the “creative zone” for settings!
Thinking that only orioles are utilizing the oranges – I notice in the rear view mirror (remember I am lodged in the back seat) a grosbeak on the orange post – note the photo shows I am still in the creative zone. 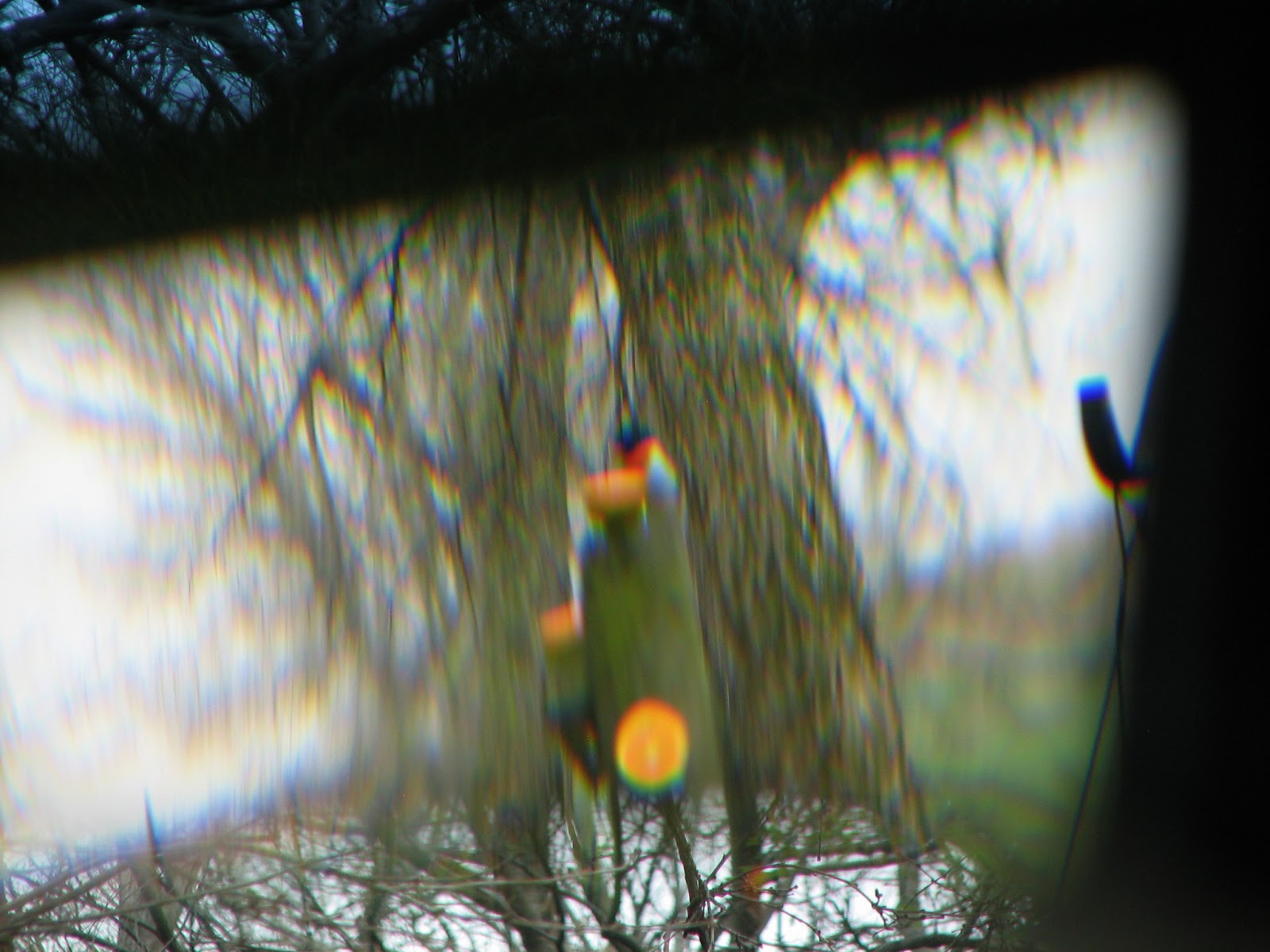 However the grosbeak stayed only second and apparently did not savour the juice of the orange.
But then there was a big commotion and every one flew into the tree tops.  Looking around outside from my safe haven of the Jeep I notice… 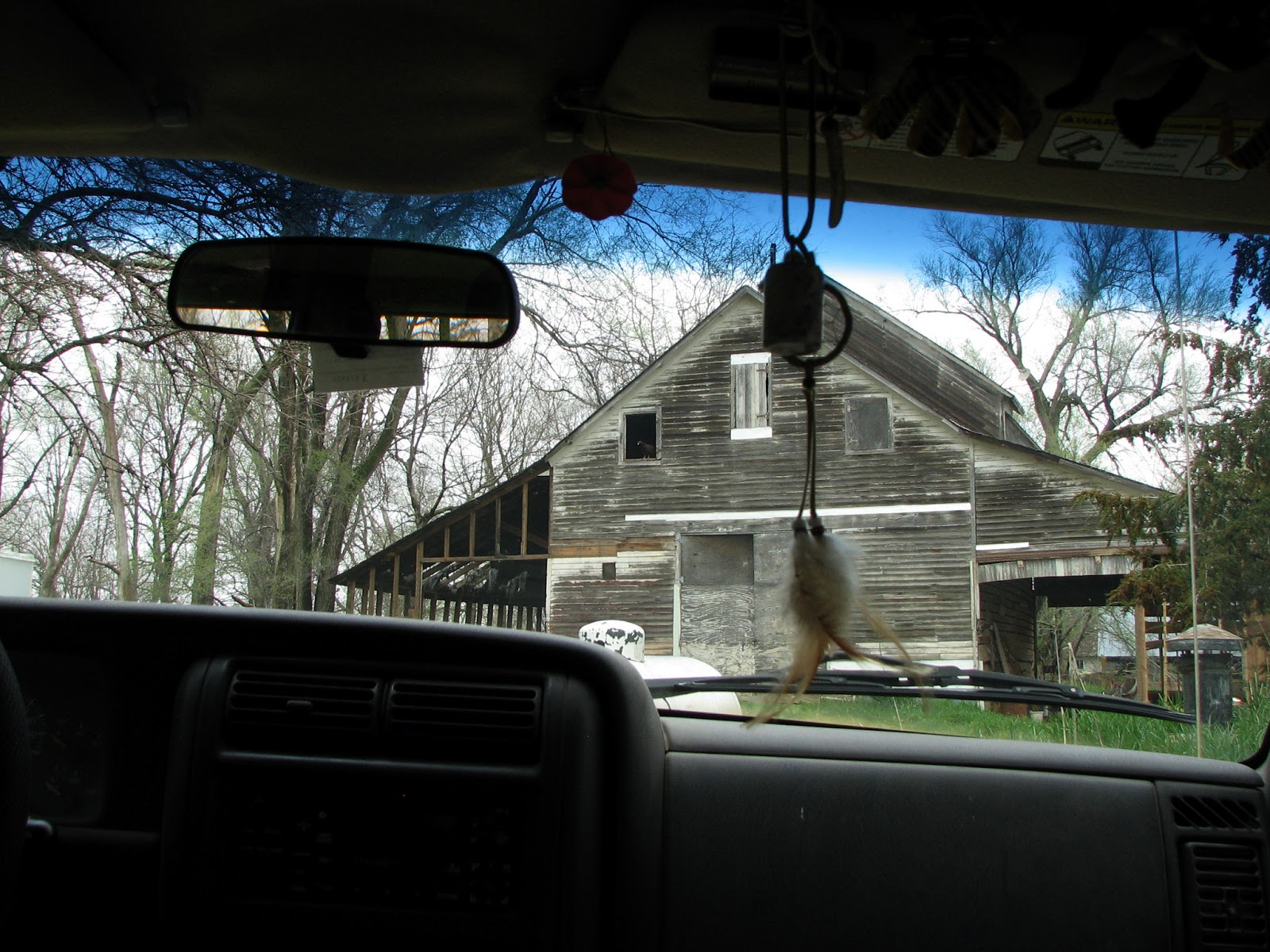 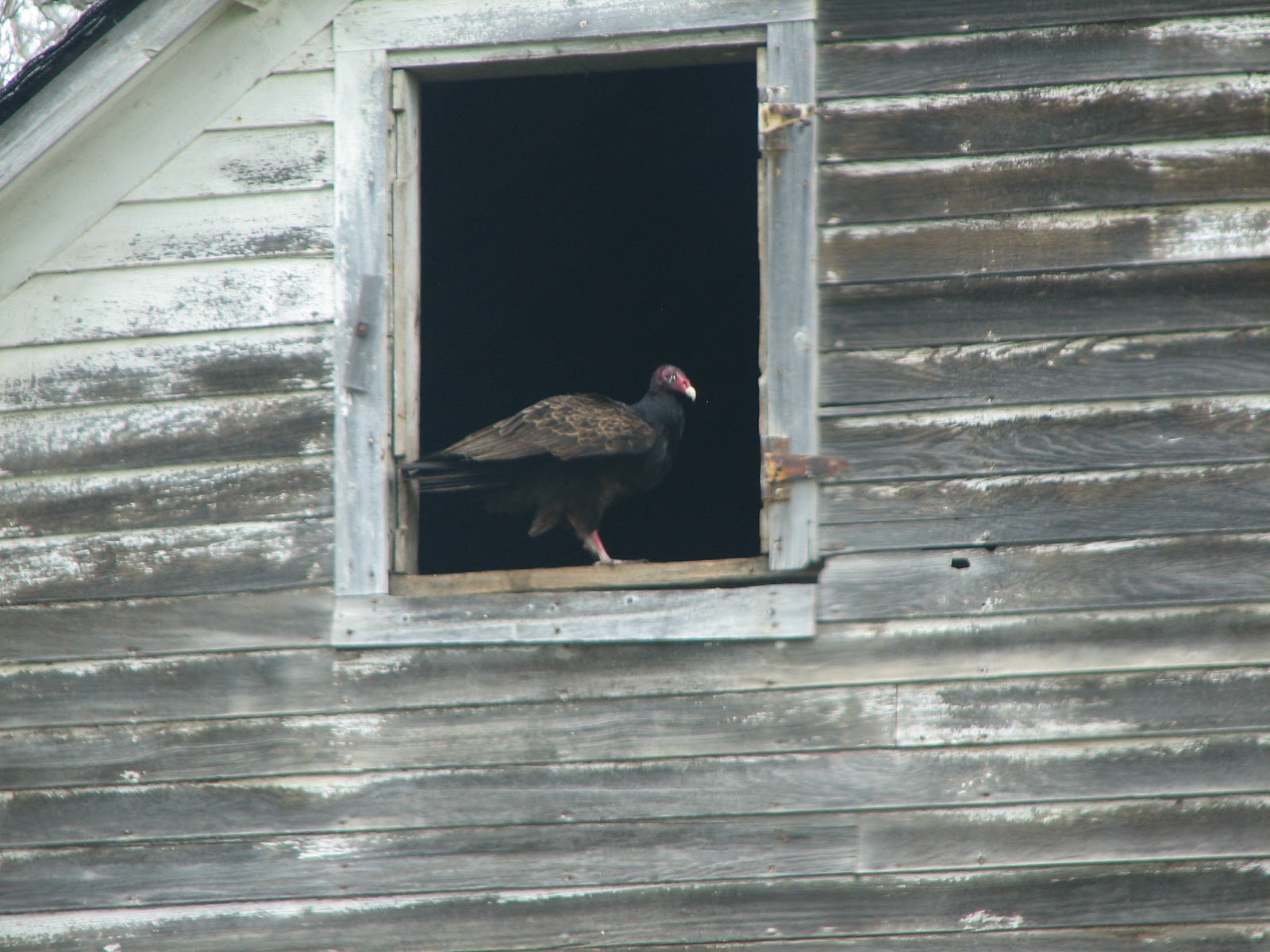 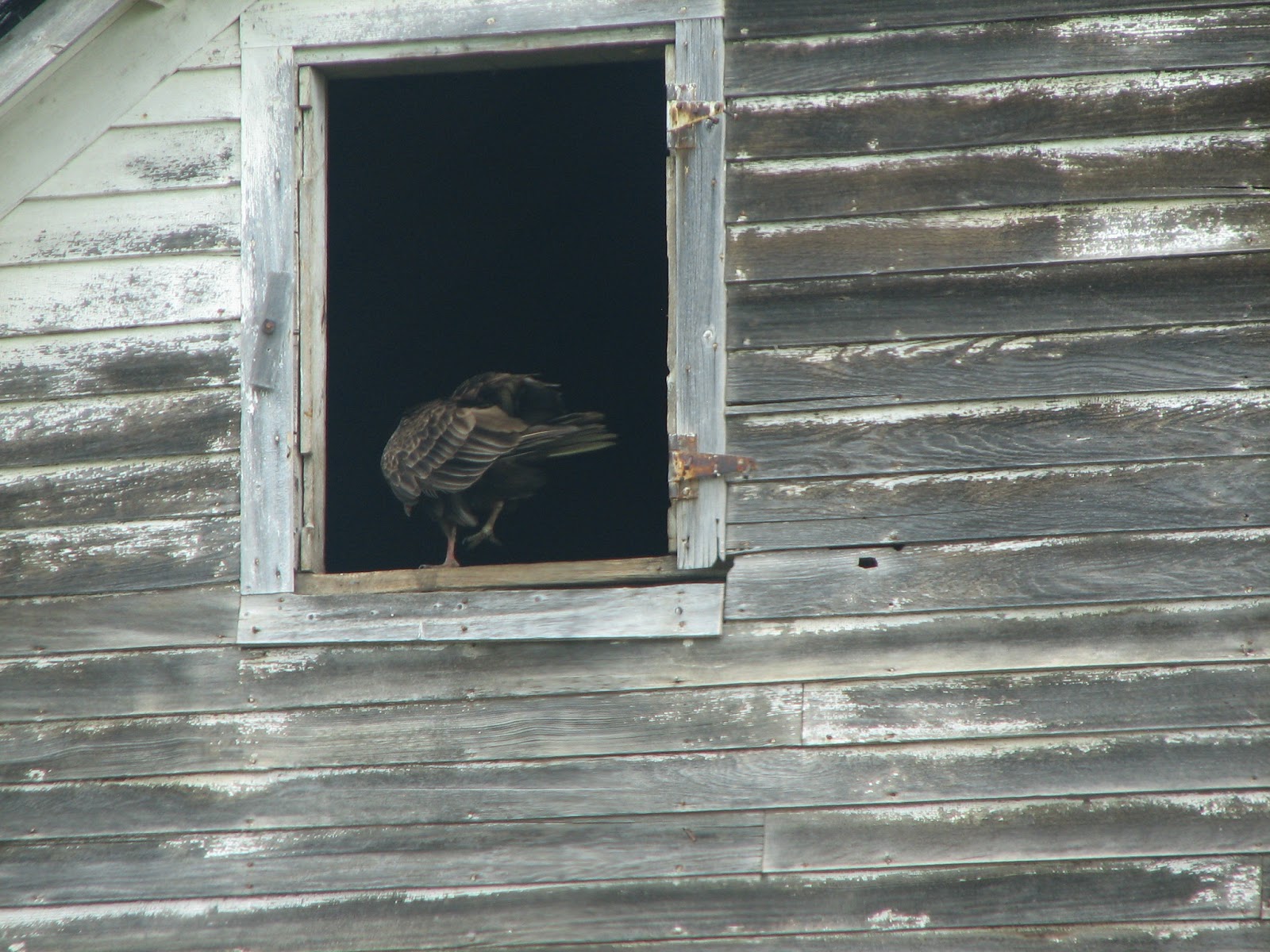 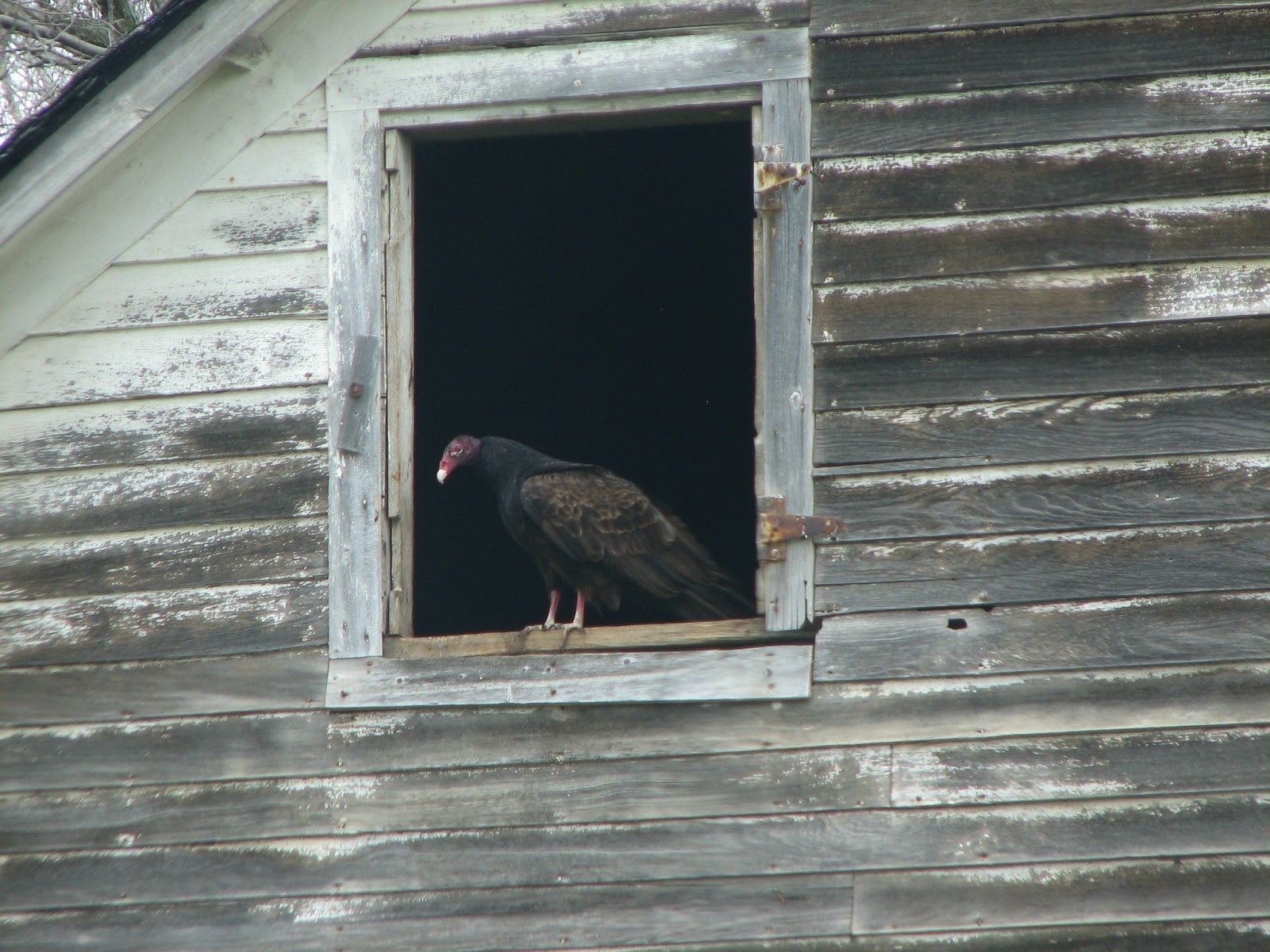 He then lofted away. And I emerged from the Jeep to stretch out my limbs and enjoy the rest of the birding day from a more comfortable distance. 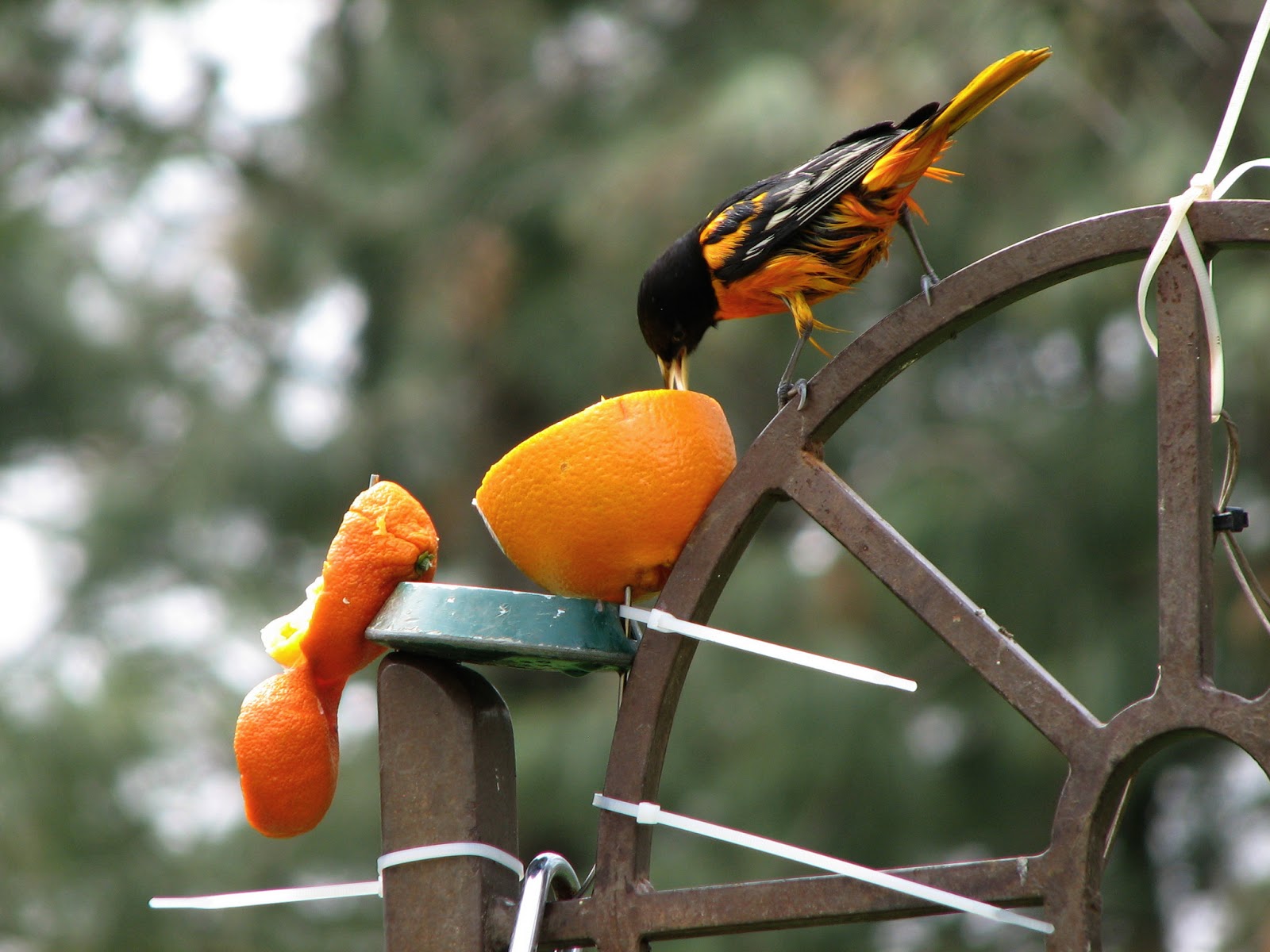 Always and ever keeping watch over the oranges 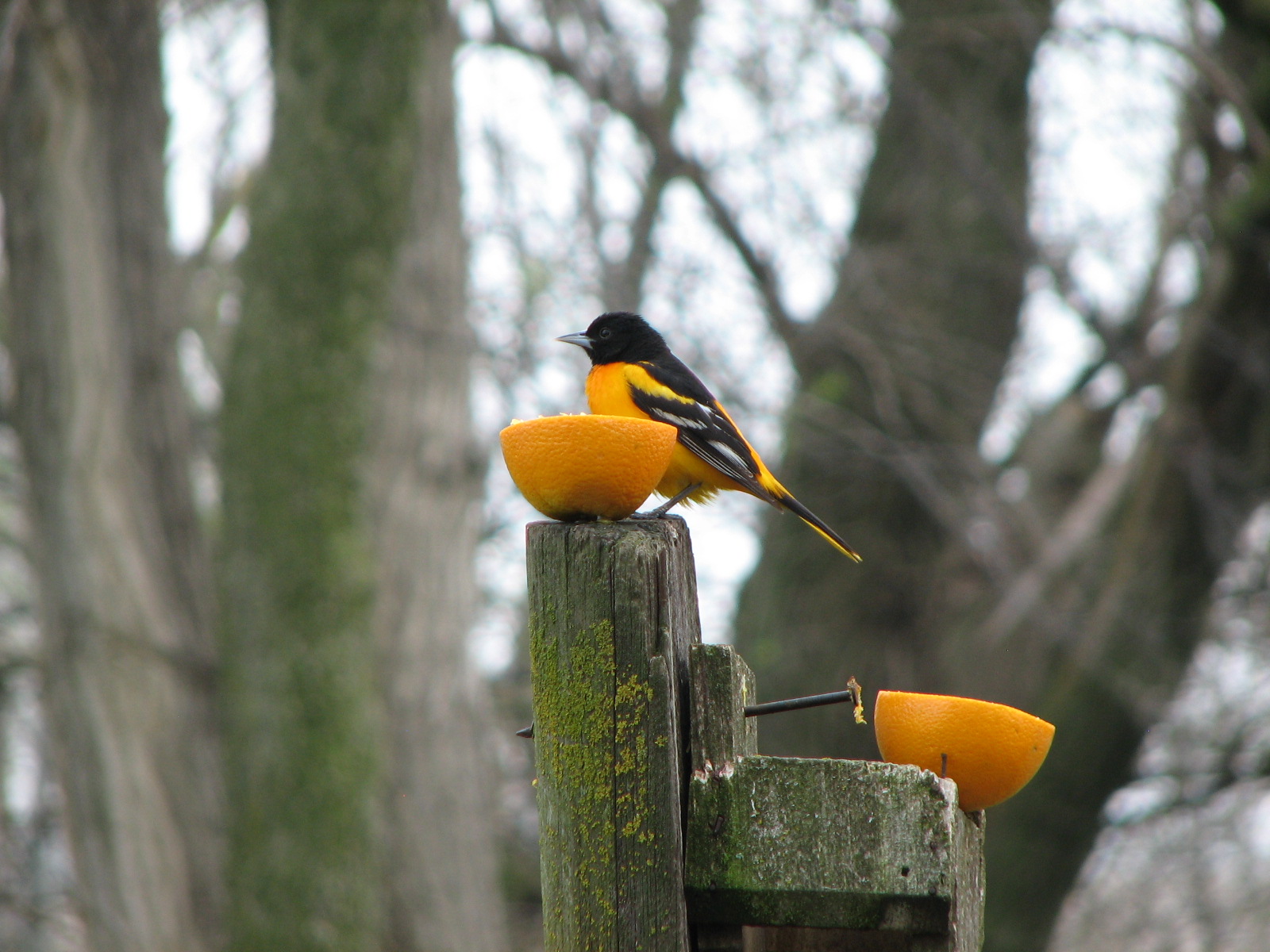 And that’s the saga of the Jeep Blind…
Gnome-ever-interesting!!!